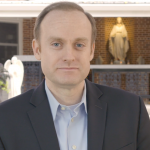 Michael O’Neill is a Relevant Radio host, author, and creator of the website MiracleHunter.com, the top online resource on miracles cited worldwide in news articles and books, including throughout renowned Mariologist Fr. René Laurentin’s comprehensive work “The Dictionary of the Apparitions of the Virgin Mary” (2010 Edizioni ART). O’Neill, a graduate of Stanford University and member of the Mariological Society of America and the Theological Commission of the International Marian Association, has been interviewed about his research numerous times for features on Catholic television programs like EWTN’s News Nightly and Bookmark and secular media like Fox & Friends, Live Science and The Dr. Oz Show. He was the consultant for the National Geographic magazine December 2015 cover story and map about the Virgin Mary “The Most Powerful Woman in the World” and was interviewed as the Marian expert on the corresponding television piece for NatGeo Explorer. O’Neill served as the expert commentator during the 2010 live broadcast of the first Marian apparition approval in history at Champion, WI and EWTN’s coverage at the 100th Anniversary Mass of Our Lady of Fatima. He is the host of the weekly Relevant Radio® program “The Miracle Hunter®” and a frequent contributor to The Drew Mariani Show. His books include “Exploring the Miraculous” (Our Sunday Visitor 2015), “365 Days with Mary” (Salt Media 2016) and “20 Answers: Apparitions & Revelations” (Catholic Answers 2017). He was selected as one of the contributing Marian scholars to the 2017 volume of “Mater Misericordiae: An Annual Journal of Mariology” about the Immaculate Heart of Mary and Fatima. He was the co-host of the television special “Miracle Hunters” (UpTV 2015) and is the creator and host of the new EWTN docuseries “They Might Be Saints” about the lives of future saints and the search for canonization miracles. In 2016, O’Neill gave a presentation at Georgetown University, delivered the keynote at the Catholic Press Association, was accepted to present a paper at the Fatima Congress in Portugal and was selected to give a lecture on miracles in Catholicism as part of the interfaith “Comparison Project” at Drake University. Each year he leads an international pilgrimage to a place of miracles (e.g. Fatima for the 100th anniversary in 2017, Italy for Padre Pio’s 50th anniversary feast day in 2018 and next year to the Marian apparition sites of France).