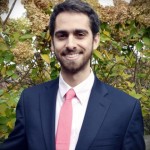 Eduardo Andino is Director of Development for First Things, America’s leading journal on religion and public life. He previously worked as a consultant with American Philanthropic, a firm serving mission-driven organizations nationwide. Eduardo holds a Master’s in History of Christianity from Notre Dame and a Bachelor’s in Intellectual History from Yale. His academic interests include the theology of history, international affairs, ancient and modern languages, global Catholicism, and the encounter between modernity and traditional cultures. He lives in Hyde Park, Chicago with his wife and daughter and enjoys playing flamenco guitar in his spare time.